New Jersey carries a catalog of gun laws on the books, regulating the purchase, use, carrying, transportation, and possession of firearms. When individuals violate the extensive laws regarding firearms, they can expect some of the most rigid penalties in the 50 states, especially concerning handguns. Importantly, anyone who illegally purchases, possesses, or uses a handgun can expect an uphill battle to maintain their freedom.

Strict Conditions When Buying a Handgun in NJ

First, New Jersey rigorously enforces handgun purchasing under the threat of a lengthy prison sentence. To buy a handgun, an individual must have proper identification and a permit. The state wants to know that the prospective purchaser is not among those prohibited from having a gun for obvious reasons. Though a simple matter like having a gun, perhaps a friend gave you, without the proper paperwork, seems like a minor oversight, New Jersey takes the offense seriously. Illegal handgun possession is a second-degree crime that carries a five-to-ten-year prison term and a $150,000.00 fine.

Moreover, those violating laws governing actual handguns should expect to be in prison. First and second degree crimes in New Jersey are high-level crimes that the New Jersey legislature wants to discourage people from committing. Thus, a judge sentencing someone convicted of a first- or second-degree crime sentence presumes the sentence includes incarceration. If a jury convicts you of a second-degree crime or you plead guilty to one, a judge sentences you to prison, unlike lower grade crimes that do not carry a presumption of prison time. Even if you legally own a handgun in another state, you may be violating the law by bringing it into New Jersey, where you must transport firearms according to the law. Illegally transporting a handgun is also a second degree crime.

However, the charges are penalties for unlawful possession and transportation convictions are not the only handgun crimes New Jersey punishes people for on a regular basis. For example, it is a third degree crime to deface a firearm, including a handgun. Defacing a gun means changing it in significant ways. For example, removing or altering the make, model, or serial number of a firearm, so that it is illegible or different from the original is illegal. And you could go to prison for 18 months and pay a $10,000.00 fine for having, receiving, or hiding a defaced handgun N.J.S.A. 2C:39-9.

Other handgun crimes include possessing a handgun for an illegal purpose, committing a crime with a handgun, and owning a pistol when you are a person forbidden by law to have a firearm. All these have varying penalties from fourth to first degree criminal convictions. A first degree crime carries a ten-to-twenty-year prison sentence with a $200,000.00 fine. Still, judges can elevate crime degrees, prison sentences, and penalties, depending on the circumstances of the crime. For example, sentencing discretion allows a judge to consider aggravating factors, like the extent of the victim’s injury or the defendant’s criminal history, to raise crime grades and penalties. Conversely, a judge can lower crime grades and penalties for mitigating factors, such as a defendant’s remorse and cooperation with law enforcement during arrest and prosecution. 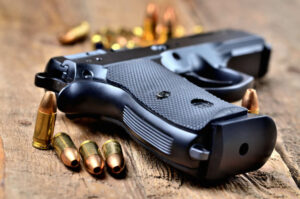 However, judges have far less discretion with most gun crimes due to New Jersey’s Graves Act, which mandates a minimum prison term before parole eligibility. So, a non-Graves Act third-degree crime may result in a three-year sentence that the inmate serves less than half of by earning credits for work and good behavior. In other words, they earn earlier parole eligibility after serving half or less of their term. Unfortunately, gun convictions under the Graves Act, like unlawful handgun possession, result in mandatory minimum sentences of at least 42 months, or one-third to one-half of the sentence, whichever is greater. And while you can get a Graves Act Waiver, they are challenging to get without the help of a gun defense lawyer experienced in obtaining waivers.

A Graves Act waiver allows a judge to sentence a defendant with a gun crime conviction to a lesser sentence, even probation or a diversionary program, like the Pre-Trial Intervention (PTI) program for first-time offenders. PTI allows a convicted defendant to complete a supervised program and avoid jail or prison. Once the defendant completes the program, the court dismisses the charges against the defendant, and they have no criminal record. It is a start-over program for first-time defendants who made poor decisions or got caught doing something illegal they did not know was against the law. For example, an out-of-state resident who brings a gun into New Jersey may not know that they broke the law. Regardless of their ignorance, the penalty for a second degree crime is severe, though too harsh for the circumstances. A prosecutor may allow a defendant to complete PTI rather than a prison sentence and, consequently, a Graves Act waiver to avoid a terrible injustice. The prosecutor decides who gets to apply for PTI. If the defendant fails to complete the program, the judge sentences them according to the guidelines of their criminal conviction.

Other defenses may be available to a defendant charged with gun violations. A gun defense attorney at our New Jersey criminal law practice knows these defenses and can work out a deal with the prosecutor or get your case dismissed if the police or prosecutor do not follow the law in doing their job. For example, the state may charge you with unlawful handgun possession without acknowledging or knowing that you qualify for an exemption under the law for being in the military or a retired police officer (N.J.S.A. 2C:39-6). And the state may not use all evidence the police seize without a warrant or valid exception to the warrant requirement to convict you. Clearly, in so many ways, it would help if you had an attorney for a handgun crime in New Jersey.

If you were arrested for a handgun offense in Fair Lawn, Teaneck, Palisades Park, Paramus, East Rutherford, on the George Washington Bridge, or elsewhere in Bergen County be sure to contact a gun defense lawyer at our Hackensack office by calling at (201)-330-4979 to discuss your case in a free consultation.