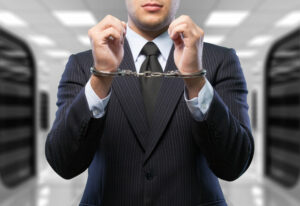 Usually individuals automatically assume that white collar crimes only occur in federal courts surrounded by breaking news stories embellished with buzzwords like Ponzi schemes, kickbacks and Wall Street. Oftentimes, what individuals do not realize is that white collar crimes appear significantly in state courts, including in New Jersey. Notably, depending on the offense, these crimes can also occur both at the state and federal level. The way these crimes find their way into the respective court that has jurisdiction to hear the matter is reliant on whether a federal or state statute has been violated.x

White collar crimes can have severe penalties, jail time and ramifications that can impact your employment and finances for years to come. If you have been charged with a white-collar criminal offense in Hackensack, Teaneck, Fort Lee, Paramus, East Rutherford, Franklin Lakes, or another Bergen County area, it is imperative to have an attorney represent you in these cases because there is so much at stake. It is equally important to review the facts of your case with a white collar crime defense lawyer so that you are armed with available defenses. Bolstering your defense based on the admissibility of the evidence against you, whether there was a mistake or err in judgment, and the involvement of an agent or third party involvement can help defend against the charges you are facing.

Contact The Tormey Law Firm in Hackensack, NJ today for a free consultation. Contact us online or call (201)-330-4979 anytime to learn more.

White collar crimes immediately illicit connotations of businesspeople in suits and ties plaguing offices with scams and deceit. Commonly, this is a result of movies and social media often invoking different imagery almost always involving professionals or individuals in the business class. Mostly this is because white collar crimes are nonviolent in nature. White collar crime is not murder, simple assault or domestic violence where there is a physical injury on a person that the Court can look at or see through an image or video. Instead, the injury is mostly financially driven and the victims are injured in a different way than a bruise or physical violence. Despite not getting physically injured from a white collar crime on one’s person, white collar crime injuries are severe and the penalties for the alleged perpetrator can be extreme. In these cases, financial records, statements and accounting books can be examined to prove the injury.

Particularly the criminal offenses that fall within the white collar crimes definition include, but are not limited, to:

What to Expect in a Fraud Case

Since fraud can occur in multiple cases and scenarios, it is important to understand what elements are used for the State to prove a case against you. Common types of fraud cases occur with insurance fraud, bad checks and falsifying records. Typically, the State will use the material misrepresentation, proof that the defendant acted knowingly/intentionally, the fact that reliance occurred, and there being an injury, as the framework to convict a defendant.

The term white collar crime was coined by sociologist Edwin Sutherland to refer to professionals with respectability that have committed a crime within the course of one’s employment. Although the word originated from Sutherland, the meaning in society truly took on a different definition because of Charles Ponzi. Ponzi was an investor that brought in new investors and paid off older investors with the new investment capital. At the time, the damages were severe. As a direct result of the losses that occurred because of Ponzi’s fraudulent practices, any fraud or deceptive acts in today’s society are frequently referred to as a Ponzi scheme. Additionally, in the business world, any business plans that mirror multi-level marketing schemes are also known for their ability to emulate Ponzi schemes because they continue to bring in money without growth opportunity for those joining the business.

Another example was from Enron in 2001. Enron was a company that committed mail fraud, wire fraud, money laundering, conspiracy, and securities fraud by falsifying accounting records to lure new investors. When the company could not live up to their record numbers, it became bankrupt and lost millions of dollars for investors and employees.

The most infamous modern day example of a white collar crime, however, was the Madoff scandal in 2008 where Bernie Madoff defrauded investors of investments worth multi-billions of dollars. The losses spanned from investors to major businesses and volunteer groups by his practices financially crippling a surplus of individuals.

State and Federal Prosecutions for White Collar Crimes in NJ

Federal courts have jurisdiction to hear cases contrary to federal statutes and acts that occur over state lines (i.e. multi-state involvement in drug cases, etc.). Different government agencies have the ability to obtain evidence for a federal prosecutor to bring charges.

In a criminal complaint in the State of New Jersey, probable cause must exist in order for a defendant to get charged with an offense. Similarly, with federal charges there must also be cause that exists to prompt the issuance of a complaint. Specifically, federal cases have investigatory/evidentiary support in order to issue the complaint. Usually government agencies will initiate the investigation that is more detailed than a case at the state level, because they have more capabilities to investigate the defendant.

The attorneys at The Tormey Law Firm have extensive knowledge and skill when it comes to defending individuals accused of white collar crimes in Bergen County and across the state of New Jersey. We will carefully investigate and if possible, aggressively dismantle the prosecution’s case against you when facing state or federal charges for white collar criminal offenses. If you have been accused of one or more white collar crimes, contact our Hackensack law office now at (201)-330-4979 for immediate assistance. We provide free consultations 24/7 to best serve your needs.