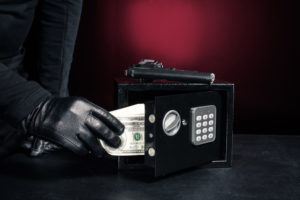 A short trip from New York City via the Washington Bridge, Fort Lee is famous for the early serials filmed there, branding it the birthplace of American movies. Only 2.5 square miles, this Bergen County borough perched atop the Palisades was named after American Revolution General Charles Lee, who aided in defending New York City from the British in 1776. Its 37,907 people, along with the year-round tourists, enjoy the sights of Manhattan and the George Washington Bridge from Fort Lee Historic Park or stroll through the numerous parks and picnic paradises at the Ross Dock or Fireman’s Park. Many tourists enjoy a fresh beverage after a few hours of shopping at the Oaktree Mall Shopping Center, hopefully mindful of what’s in their shopping bags as they rest and refresh. Though the city is ranked in the top 50 of safest cities in New Jersey, Fort Lee’s most prevalent crimes are those committed against property, including theft offenses. A theft conviction in Fort Lee, however, is certainly not worth whatever is in any shopping bags.

If you have been charged with a theft related crime such as shoplifting, burglary, receiving stolen property, credit card theft, or check fraud in Fort Lee NJ, it is incumbent upon you to find out the specific consequences that you now face and how you can possibly avoid them. Consulting with a knowledgeable Fort Lee theft defense lawyer is paramount when seeking to protect your best interests. You can reach us anytime by calling 201-330-4979 to learn more in a free consultation.

New Jersey’s theft laws catalog the various types of unlawful taking or possessing of another’s property. Aside from knowingly taking someone’s movable property, theft is also accomplished by deception, extortion, shoplifting or receiving stolen goods. Of note, services may be stolen also. Keeping someone’s lost property or property mistakenly delivered is also considered theft. Moreover, theft can be accomplished by fraud or perpetrated with the intent to permanently deprive someone of their possessions. It is also considered a crime of moral turpitude, which refers to an immoral act. Theft, extortion, shoplifting, theft of services, and receiving stolen property are all crimes of moral turpitude, which have dire consequences for the perpetrator, including possible U.S. immigration disqualification.

Charged with Theft in Fort Lee, What are the Possible Consequences?

Aside from the immigration risks, penalties for theft in New Jersey are severe, depending on the value and type of property stolen. If less than $200.00 worth of goods or services are taken, the offender has committed petty theft and is prosecuted for a disorderly persons offense in Fort Lee Municipal Court. A disorderly persons offense conviction carries a possible six months’ imprisonment and $1,000.00 fine sentence. However, like all theft offenses, the judge can set the fine amount to double the property loss value if higher than the statutory fine maximum. If over $200.00 but less than $500.00 worth of property or services are stolen, the offender faces imprisonment for 18 months and a fine of $10,000.00 for a fourth degree indictable crime.

In addition, stealing something valued between $500.00 and $75,000.00 constitute third degree theft. Plus, third degree theft is often categorized by the type of item involved, whether it be a gun, car, boat, horse, pet, airplane, illegal drugs weighing less than a kilogram or valued under $75,000.00, and certain papers, devices, and documents. It can also be qualified by circumstances. For example, taking something from a fiduciary (person in a trusted position, like a guardian or trustee) or from a person’s hands or elsewhere on the body of the person, either physically or by threat, also constitutes a crime of the third degree, punishable by three to five years’ imprisonment and a $15,000.00 fine.

Beyond that, a second degree theft conviction for property or services valued over $75,000.00, illegal drugs over one kilogram, extorted property, or stealing human remains, comes with a sentence of 5 to 10 years in prison and a fine of $150,000.00. In addition to imprisonment and fines for theft charges, a convicted offender’s sentence often includes restitution payments to the victim in an amount equal to the value of the stolen property. And if the property stolen is a motor vehicle, an additional $500.00 penalty, or higher for a stolen car that cannot be retrieved, plus a one-year license suspension is added to the sentence, if it is a first offense. A second motor vehicle theft offense raises the penalty to $750.00 with a two-year license suspension. Three or more convictions include a $1,000.00 penalty and a ten-year suspension.

Finally, if imprisonment, fines, and penalties were not enough for criminal theft, shoplifters may owe a merchant or store owner for the value of unsellable merchandise, other monetary damages arising from the shoplifting, and up to $150.00 in civil penalties.

Arrested for Theft in Fort Lee, What can I do?

If you are convicted of any type of theft crimes in Fort Lee, New Jersey, expect to spend considerable time defending your innocence in Bergen County Superior Court for indictable second, third, and fourth degree crimes, or Fort Lee Municipal Court for disorderly persons offenses. A good theft defense attorney, however, may ultimately save you time and money, but more importantly, your freedom. To discuss your theft case with a highly qualified lawyer who provides strategic defense for clients facing theft charges in Fort Lee and throughout Bergen County, contact our office now at 201-330-4979. Remember, consultations are free and so are the answers you are searching for.