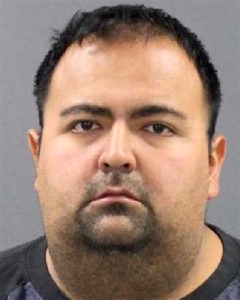 Police in Lyndhurst, New Jersey arrested a man who reportedly attempted to record someone in a public park restroom. The suspect, 38-year-old Raul Rodriguez, is a Jersey City resident and is employed as a grocery store clerk. Rodriguez reportedly went to Riverside County Park in Lyndhurst, NJ, entered the restroom, and started to use his cell phone to record someone in the restroom. The Lyndhurst Police Department received a call to report suspicious activity at the park and dispatched police officers to the area. Lyndhurst officers were joined by officers with the Bergen County Sheriff’s Office.

Authorities soon located Rodriguez at the Lyndhurst park and questioned him. Bergen County Prosecutor’s Office detectives then showed up at the scene to help with the investigation. According to law enforcement officials, the investigation “revealed that Rodriguez used the camera on a smartphone to record and view an area of the men’s bathroom.” Rodriguez was arrested and charged with invasion of privacy.

Possession of child pornography is a very serious sex crime listed in the New Jersey Criminal Code. It is illegal for anyone to knowingly receive, distribute, download, upload, promote, or traffic images or videos of children having sex. Under N.J.S.A. 2C:24-4b(5)(b), anyone found in possession of films, photos, or computer files that depict a minor engaged in prohibited sexual acts can face fourth degree felony charges. Additionally, Bergen County prosecutors have a tendency to aggressively prosecute child pornography cases because the crime places minors at risk. An adult who is convicted of possessing child pornography in Bergen County Superior Court in Hackensack, NJ could be subject to severe penalties that include a sentence of 18 months in NJ State Prison and a fine of $10,000.

If you were charged with possession of child pornography in NJ, you need to speak with a qualified criminal defense attorney immediately. The experienced Bergen County criminal defense lawyers with the Tormey Law Firm are prepared to aggressively defend clients against sex crime charges in New Jersey. Prior to founding the Tormey Law Firm, Travis Tormey worked closely with the sex crime unit of the US Attorney’s Office. Contact Attorney Tormey today to begin building your defense.