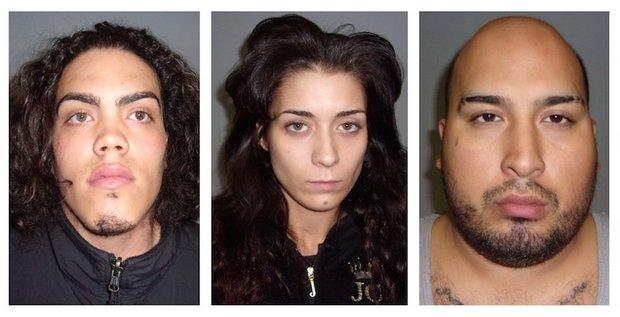 According to Bergen County authorities, the suspects abducted the 22-year-old male victim and then spent the next few hours brutally beating him.

Bergen County NJ officials believe that the suspects took the victim a short time after they discovered that he was conspiring with another person to burglarize the Lyndhurst apartment of one of the suspects. When the main suspect learned about the burglary plan, he allegedly restrained the victim by using duct tape and electrical cord.

While the victim was tied to a chair and unable to move, the suspects allegedly shaved his eyebrows with a razor, cut off his hair with a knife, and burned his tongue with a lit cigarette.

Afterwards, one of the suspects allegedly pointed a gun at the victim and forced him into a car.

The suspects are said to have driven the victim for a while. They also reportedly chased after another man they believed was involved in the burglary scheme. Wayne NJ police officers eventually spotted the vehicle parked along the side of Route 23. When police peered inside the car, they saw the victim.

The victim was taken to St. Joseph’s Regional Medical Center in Paterson NJ, where he received medical treatment for injuries that reportedly included a swollen jaw, cuts over his eyes, and burns on his tongue. The victim was later listed in stable condition.

Meanwhile, the three suspects were arrested. They face charges for a number of serious crimes, including kidnapping, criminal restraint, aggravated assault, and terroristic threats. Moreover, two of the suspects were charged with various weapons offenses.

After being placed under arrest and charged, the suspects were moved to the Bergen County Jail in Hackensack, NJ. They are being held at the jail in lieu of separate bail amounts that range from $400K to $500K.