By Travis Tormey posted in Theft Offenses on Tuesday, February 26, 2013 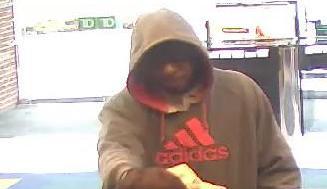 Fair Lawn police have released a photo of a suspect who is believed to have robbed a TD Bank in Fair Lawn on River Road on Monday afternoon. According to the NJ.com article and Fair Lawn police, “[t]he suspect is descried as a 6-foot black male between 25 and 30 who weighs around 170 pounds and sports some facial hair. At the time of the robbery, he was wearing a gray hooded sweatshirt with an Adidas logo, black winter gloves and a dark-colored cap.”

According to reports, he entered the bank around 2:19 p.m. on Monday afternoon and handed the teller a note demanding cash. He did not display a weapon or threaten to use one. He took off with about $2,800 in cash from the robbery.